Trafficked, beaten and locked up far from his family in China, Lu was one of thousands of people in Cambodia forced to operate online scams to line their captors’ pockets.

Covid shutdowns had left the builder out of work, so when he heard he could earn $2,000 a month on a construction project in Cambodia, he jumped at the chance.

But he soon realised he had been lured by a scamming gang to a compound in the seaside resort of Sihanoukville, along with hundreds of others.

There he was forced to work 12 to 16 hour shifts, trawling social media and dating apps on a hunt for victims to scam out of huge sums.

“Once I arrived it was too late to escape,” Lu told AFP. “But as long as I was alive, I would keep trying.”

People from countries around Asia — including Vietnam, the Philippines, Thailand, Malaysia, China, Taiwan, Hong Kong, Bangladesh and India — have been sucked into similar operations. 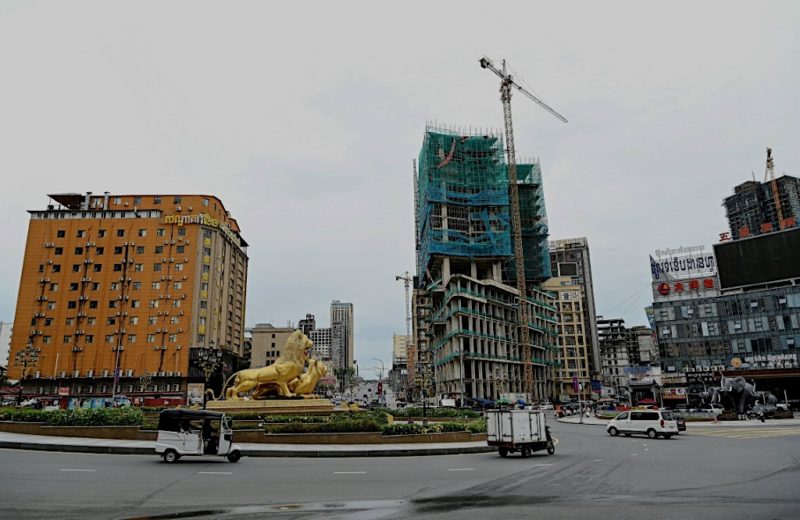 Dozens of casinos sprang up in recent years in Sihanoukville following Chinese investment, making the city a hub for gamblers and drawing in international crime groups – Copyright POOL/AFP Ben STANSALL

Some, like 34-year-old Lu, have made it out, though thousands of others are feared still trapped.

In August, the UN special rapporteur on the situation of human rights in Cambodia, Vitit Muntarbhorn, said the trafficking victims “were experiencing a living hell often resulting in torture and even death”.

Sihanoukville was once a sleepy resort town, but it was transformed by a vast influx of Chinese investment.

Dozens of casinos sprang up in recent years, making it a hub for Chinese gamblers and drawing in international crime groups.

As travel restrictions bit during the pandemic, these groups shifted their focus.

Jeremy Douglas, of the United Nations Office for Drugs and Crime (UNODC), said “criminal groups moved casino businesses online, and some then did a pivot and added online and phone scams”. 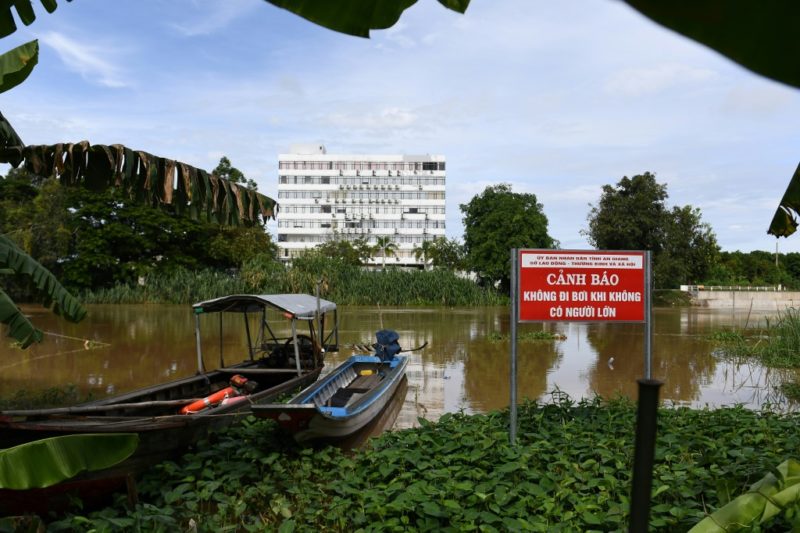 The Binh Di River that Vietnamese forced labour workers swam across in August after escaping a scamming gang based in a casino in Kandal province in Cambodia. — © AFP

One gang member told AFP on condition of anonymity that the first people to fall prey to operations like his were Chinese nationals already in Cambodia.

Then gangs started trafficking people into the country.

Douglas of the UNODC said “thousands, and some have estimated possibly tens of thousands” of people have been ensnared.

To stop victims from escaping, compounds were installed with metal window bars and barbed wire.

“Once they arrived in the compound, they could not leave,” the gang member said.

“People were beaten or tortured and sold if they refused to scam others.”

Within Cambodia, some were sold on to other gangs, the source said. Those with good IT or English-language skills could be sold for up to $50,000.

AFP interviewed four trafficking victims who said they too received lucrative job offers during the pandemic.

A 38-year-old Malaysian Chinese man called Roy described flying to Phnom Penh and being met by a woman in smart office wear who whisked him through immigration and into a car for the five-hour drive to Sihanoukville.

There, he was taken to a complex of apartment blocks a dozen or so storeys tall, housing a mix of accommodation and office rooms.

“It just looked like a normal office, with three rows of tables with monitors and keyboards, just like a cybercafe,” Roy told AFP.

But he said “once you get in you know you’re not doing customer service”.

Roy and others like him had their passports taken away, and were instructed to set up fake profiles on apps and dating sites including TikTok, Facebook, Instagram and WhatsApp.

Under the constant threat of violence, they would groom targets to pour money into crypto currency or other investment platforms.

Others were forced to build online “love” relationships with their targets and to scam them under the guise of needing help to pay debts off. 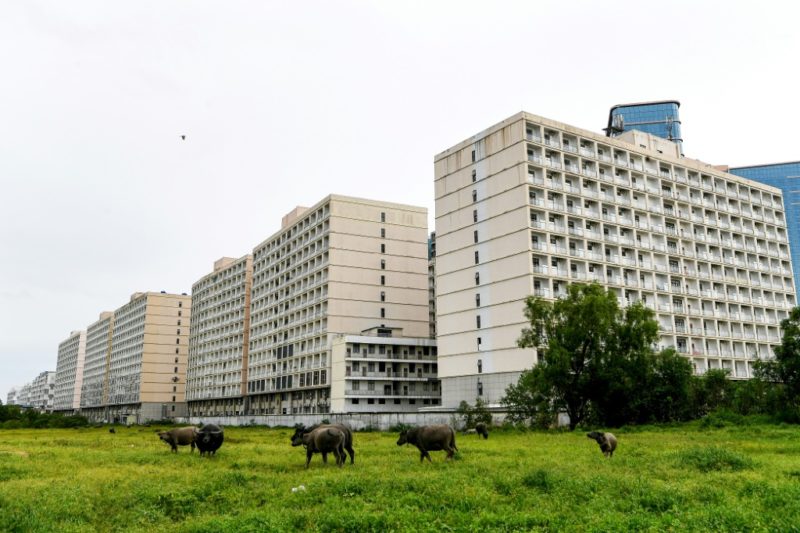 Buffalos walk in a field in front of the empty buildings of in the Chinatown district in Sihanoukville. — © AFP

There are no reliable figures on how much money the gangs have netted from the scams, though the UN’s Douglas said the numbers are “staggering”.

It is not clear where the money ends up, he added, though criminal proceeds are often bundled together with online betting profits, with many of the scam compounds located near legal gambling businesses.

The gang member in Sihanoukville told AFP he did not know who he was ultimately working for.

Forced scammers who resisted paid a high price. Construction worker Lu said he was “beaten quite often” because he was caught trying to escape.

Others said gang members used electric batons to inflict shocks, or forced workers into rooms too small to stand in, depriving them of water, food and light for hours.

“They ask someone to lie down and then kick them, like a dog,” Roy said.

“Sometimes (they would) get an electric shock, kick and shock. They would get a five-minute to 10-minute beating.”

After being told he would have to buy his way out for $20,000, he was rescued after contacting Taiwanese victims group the Global Anti-Trafficking Organisation (GASO).

The group works with Cambodian officials to facilitate rescues and repatriate citizens.

Others have taken a more dramatic approach — in August dozens of Vietnamese workers escaped a casino in southern Kandal province and swam across a river back to their homeland.

Attention on the issue has grown: in July the United States downgraded Cambodia in its annual human trafficking report.

After months of official denials, Prime Minister Hun Sen ordered a hunt for ringleaders and authorities launched a string of high-profile raids in August.

It was during one such raid that Lu was released.

Still, international observers and rights groups are sceptical of the depth of the government’s crackdown.

“Criminal accountability for the ringleaders of the transnational organised crime networks is absolutely essential if we hope to eradicate this issue,” he said.

There are fears that rather than shutting down, the groups are simply relocating.

“Today it is an operation in Cambodia, but tomorrow a gang under pressure uproots and shifts to Myanmar, Laos or the Philippines — and this has happened,” the UN’s Douglas said.

Back in Cambodia, those rescued by police, like Lu, face an uncertain future.

While he has evaded immigration detention, he told AFP he cannot afford to return to his wife and nine-year-old child in China.

A spokesperson for China’s foreign ministry told AFP the government was working with Cambodia and other countries to fight transnational crime, and that it “resolutely upholds both the safety and legal rights and privileges of Chinese citizens abroad”.

Lu said he had received no help from the Chinese embassy.

“The Chinese embassy only has one thing to say: ‘Adults have to pay for their decisions,’” he said.